This, of course, is the spiritual reality—and I have found it to be exceptionally practical. To the degree that one understands it, and consents to it as reality in any given situation, it becomes manifest in very tangible ways in one’s human experience. So, let’s take a look at what there is to be understood about completeness and progress from the spiritual standpoint taken in Christian Science. It has to do with the spiritual record of creation in the first book of the Holy Bible. 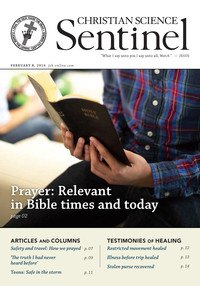