A depth of joy I’d never felt before

There was a period years ago when outwardly it seemed that I was completely happy. However, underneath I felt an underlying concern that I did not “know” enough or have enough spiritual understanding to address my children’s health completely through a reliance on scientific prayer. There were times when I would be in a group where the discussion would turn to all the illnesses and injuries that could happen to a child, and I would go home in such a state of fear that I could not sleep. This went on for a number of years.

Soon after my family’s return home to the United States after living overseas for three years, one of the children exhibited signs of a recurring problem, which caused me concern. Despite my fear, I knew the problem needed to be addressed directly, so I called a Christian Science practitioner in our area to pray for the child.

Send a comment to the editors
NEXT IN THIS ISSUE
Article
Hello, good thoughts! Goodbye, bad thoughts! 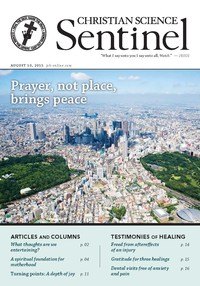