My body was completely restored

Originally written in Spanish, this testimony first appeared in the February 2015 Portuguese, Spanish, French, and German editions of The Herald of Christian Science.

When I became acquainted with Christian Science several years ago, I was suffering from morbid obesity and high blood pressure, and I was a candidate for surgery in order to lose weight. When the first medical tests were made for the intervention, it was discovered that I had other internal problems, and the doctors felt it was risky for me to undergo an operation.

So I decided to devote myself to reading Science and Health with Key to the Scriptures by Mary Baker Eddy. Furthermore, I regularly studied the Christian Science Bible Lesson and read many articles from The Herald of Christian Science in Spanish, which I got from a Christian Science Reading Room. I was amazed by what I was learning, because for years I had been longing to understand God and to feel His presence. 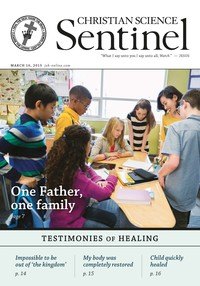