In April 1970, when the Apollo 13 spacecraft’s lunar landing was aborted after an oxygen tank exploded, the three-man crew faced life-threatening adversities in outer space for several days before their dramatic splashdown in the South Pacific. Christian Science Monitor cartoonist Guernsey LePelley published an unforgettable cartoon picturing a tiny Apollo 13 spacecraft safely sheltered within two mighty celestial hands. The cartoon’s caption, taken from Psalm 139, appears in Section 3 of this week’s Bible Lesson, titled “God”: “Even there … thy right hand shall hold me” (Psalms 139:10, citation 11).

The account of Jacob’s dream at Bethel (house of God) in Section 3 underscores the overall theme of this week’s Lesson, given in the Golden Text: “The Lord your God is with you wherever you go” (Joshua 1:9, New King James Version). The patriarch’s desperate situation must have seemed as desolate to him as that of the Apollo 13 crew marooned in outer space.

Christian Science practitioner and teacher Mary Trammell earned her MA and PhD in English literature and Bible history and coauthored The Reforming Power of the Scriptures. 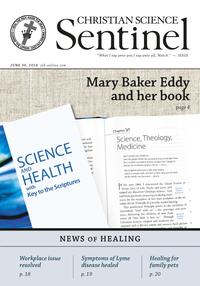