RIGHT NOW in the United Kingdom the gender pay gap is a hot-button issue. Harriet Harman, the Secretary of State for Equalities and Minister for Women, is prepared to pilot through Parliament an Equality Bill, which will be announced by the Queen at the State Opening of Parliament on December 3 and then debated by Members. The bill is designed to ensure equality in the workplace, insisting that equal pay for equal work is everyone's human right.

As I see it, to pay someone less because of his or her gender is grossly unfair and unprincipled. But when you look at life through the lens of divine Spirit, rather than from a material standpoint, you find a new world in which you're taken beyond the narrow confines of all forms of discrimination to a whole new place of freedom. The view becomes clearer when you look at such issues from the higher laws of God, relating to our divine birthright.

Contributing editor Marta Greenwood is a Christian Science practitioner and teacher in London. 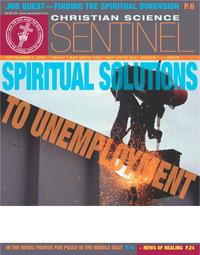