A lifetime of spiritual healing

When I was twelve, I became seriously ill and was not able to retain any nourishment for two weeks. A Christian Science practitioner was praying for me during this period, however. I talked daily with this dear practitioner and would frequently sit up in bed and sing two of the hymns with words by Mary Baker Eddy—hymns that I loved (and still do!). They begin, "Shepherd, show me how to go . . ." and, "O gentle presence . . ." (see Christian Science Hymnal, Nos. 304, 207).

After two weeks, it appeared that I was not any better, and my dad, who was not a Christian Scientist at the time, insisted that I be taken to a doctor. This doctor had an aunt who was a Christian Scientist and was very interested in what he was learning about it. The practitioner asked me if I wanted to have medical help; I answered no, that God would heal me. 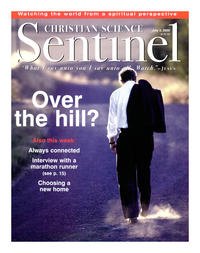