“In thinking about globalization, we need to start with God.”

NEW ZEALAND In New Zealand, we — especially the younger generation — sometimes perceive ourselves as being in the middle of nowhere. Now that's starting to break down, thanks to the media. And there's so much talk about the New Zealand economy being a fine example of an economy that functions the way it should. The Internet is allowing people to find out about that.

The positive aspects of globalization are really happening because hearts are reaching out to hearts. People are starting to look for spiritual answers because we've exhausted everything else. Mary Baker Eddy's book Science and Health can help religions around the world find a basis for working together. 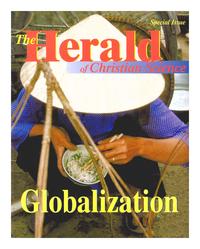