Suicide: it's never a solution

In an editorial titled "Life and the Law," in The Christian Science Monitor (January 10, 1997), the debate over doctor-assisted suicide was briefly touched upon. The editorial's rejection of suicide as a solution coincides with an experience I had a number of years ago. At the time, I was taking a doctor-prescribed drug for a condition diagnosed as "nerves," but the condition worsened. When I told the doctor this, he couldn't understand why it was happening. I thought, "If you don't understand it, what am I supposed to do?"

At one point during this time, I felt a silent influence to commit suicide. Intuitively my response was "I have no right to take life; it is not mine to take." I decided to pour the drug down the drain, and gave no further attention to that condition. I was just becoming interested in Christian Science, and since then I have better understood the basis for my refusal to commit suicide. It breaks the Scriptural command "Thou shalt not kill" (Ex. 20:13). 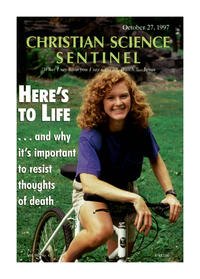