Smithsonian editor John P. Wiley, Jr., writing in the magazine's book review column, Smithsonian, April 1996, pp. 130–132 . pointed to an area of environmental research today that focuses on "ecosystem decay." This degradation of the environment and the corresponding extinctions of plant and animal species are thought to be related directly to a fragmentation of the earth's natural habitats.

Wiley's review notes the careful observations of author David Quammen in his formidable new book, The Song of the Dodo. The central subject of Quammen's thesis concerns the underlying causes for what he bluntly describes as "the extinction of species in a world that has been hacked to pieces." Wiley writes that the theory of ecosystem decay, as presented in Quammen's book, would apply specifically "to all fragmented habitats, which means all habitats" (emphasis added).

Send a comment to the editors
NEXT IN THIS ISSUE
Testimony of Healing
I have known the term Christian Science for a long time, actually... 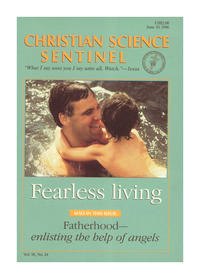