When it came time to conduct major science projects in school, most of us students appreciated being able to work together in groups. That way it wasn't on any one person's shoulders to do all the research, all the testing, and single-handedly compile all the results! Each of us had a role to play in the project and we each knew it was our responsibility to fill it. And so we cooperated. We supported one another. And we all benefited from the cooperation.

There are a lot of "science projects" going on today, not just in school but in the whole range of human life. Pick up just about any newsmagazine and you can read about the latest research and development in areas such as behavioral science, medicine, the human mind. Not long ago, I was reading about some research being conducted at a major university. Scientists and scholars there are very enthusiastic about the data they're gathering on the influence of thought on an electronic measuring device looking at what they call "the consciousness effect." I could picture the people at this university working tirelessly with others in their group. I thought of the members of that team analyzing the large amounts of data, and I could imagine them supporting one another in their findings. I felt as though I were right there as a member of their team.

Send a comment to the editors
NEXT IN THIS ISSUE
Testimony of Healing
A few years ago, my husband called me to say our son had been... 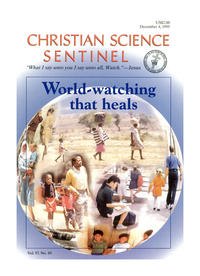