Science—the need to advance beyond the Jurassic period

In conversations with a number of ministers over the past few years, I've been told that one of their great challenges lies in trying to interest their young parishioners in taking religion seriously in the face of all of the technological breakthroughs brought forth by modern science. Young people, they say, are so impressed with quick, high-tech solutions to today's problems that they don't want to take the time to pray quietly to God.

In 1990, author Michael Crichton wrote a book about a biotechnological application run amok. His book, Jurassic Park, more recently was made into a movie about the re-creation of a dinosaur population through the capture and duplication of ancient DNA fragments. A character in his book, Ian Malcolm, is a mathematician who foresees problems with the experiment and blames the obsolescence of science for mankind's predicament. During a discussion with the owner of Jurassic Park, Malcolm states, "All this attempt to control. ... We are talking about Western attitudes that are five hundred years old. They began at the time when Florence, Italy, was the most important city in the world. The basic idea of science—that there was a new way to look at reality, that it was objective, that it did not depend on your beliefs or your nationality, that it was rational—that idea was fresh and exciting back then. It offered promise and hope for the future, and it swept away the old medieval system, which was hundreds of years old." He continues, "But now, science is the belief system that is hundreds of years old. And like the medieval system before it, science is starting not to fit the world any more. Science has attained so much power that its practical limits begin to be apparent" (New York: Random House, 1990, pp. 312-313). 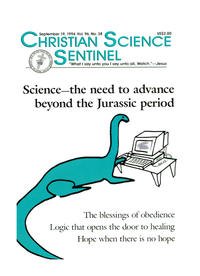