"I will not lie with thee"

We can reject suggestions of evil as unrelated to God or to His image, man, and rest in the consciousness of God's love.

I Had been tossing and turning for several hours one night. I couldn't seem to erase the mental pictures of a disturbing experience that had occurred years before. With humility I asked God to help me. I listened. The thought came: "I will not lie with thee." My first reaction was, "What kind of an answer is that?" Again the thought came clearly: "I will not lie with thee."

Then I remembered the Bible account of Joseph, who had been sold into slavery. As we read in Genesis (chap. 39), his master, Potiphar, recognized that God was with Joseph and made him overseer of his house, entrusting him with the care of all his possessions. But then Potiphar's wife made overtures to Joseph to engage in an illicit affair. Joseph refused "to lie by her, or to be with her." He knew that it would be morally wrong for him to consent to her enticements; but even more important, he saw that it would be a "sin against God." 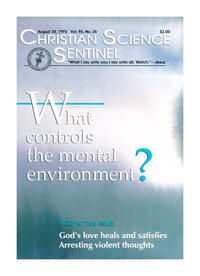