A young man I know just recently finished his college education. He could finally look back on his academic career and feel a solid sense of accomplishment about the progress he had made. There had been struggles, but he had persevered, pulled his grades up, and graduated on the dean's list. Another young person, a teenage girl, tried out for her high-school field hockey team when she was a sophomore. She hadn't played the sport before, but she worked hard and, by the time she was a senior, the team elected her as one of its cocaptains.

There other examples come to mind. A man whose family business seemed to be on the verge of bankruptcy refused to give up. He took every step he knew in an honest effort to turn the business around. But even more than that, he earnestly prayed through that difficult period and followed God's leading. The business survived. A woman was facing terrific difficulties in her marriage, yet she knew how important it was to preserve all the good that was shared between her husband and herself. She too found the way to face the challenge by turning to God, and the marriage was restored. And there was a young man who suffered from a debilitating physical difficulty that recurred almost weekly. As he found his life being transformed by a spiritual awakening and a growing sense of his unity with God, the physical illness simply faded away. 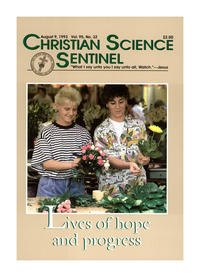