The first Bible to include both the Old and New Testaments (the Latin Vulgate Bible) was compiled by Jerome between A.D. 383 and 405. Yet it was less than five hundred years ago before the Bible was readily available to most people who wanted to read it. Until the invention of printing in the fifteenth century, only a few clergymen had access to the Scriptures. Today, probably more copies of the Bible exist than of any other single title.

This being National Bible Week in the United States, The Christian Science Publishing Society is giving more than usual attention to the Book of books, which has so influenced the course of human history. This Sentinel contains several articles showing how individual lives have been transformed by the Bible. November's issue of The Christian Science Journal is titled "The reforming power of the Scriptures" and includes the first monthly installment of a series exploring the history of the Bible and its regenerating influence. The radio edition of the Christian Science Sentinel continues its profile on the Journal's Bible series. The Christian Science Monitor's daily religious article presents "The Bible Today" on November 23.

Send a comment to the editors
NEXT IN THIS ISSUE
Article
The Bible: humanity's friend—and yours! 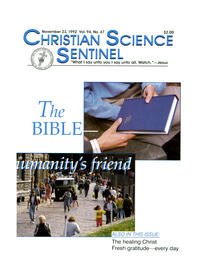