The news media seem filled today with reports of the struggles...

The news media seem filled today with reports of the struggles of the homeless, the poor, the single-parent families. I have found that Christian Science provides the answers that help one see these challenges become opportunities to find a better, more satisfying and fruitful life.

My father passed on when I was three, but I never felt that I was without a father. One of the earliest lessons I learned from my mother was that God is everyone's real Father and Mother. Many years before, my mother had had an instantaneous healing after reading the chapter "Prayer" in Science and Health by Mrs. Eddy and learning that God is not only "our Father" but also our Mother. Doctors had told her she had tuberculosis and had less than a year to live. However, when the spiritual truth dawned on her than God was her real Father and Mother, a longstanding resentment of her parents was healed and so was the tuberculosis. Hemorrhaging ceased, and she regained the weight she'd lost. She began to feel really alive for the first time in her life. 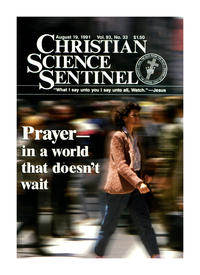