Closing the gap between "should" and "can"

Seeing the spiritual truth of ourselves and of God is what enables us to know what's right—and to do it.

Attitudes toward using corporal punishment to discipline children have changed considerably over the years. Example: when I was in the eighth grade, a boy in my class was called into the principal's office one day. There, mounted on the wall, was what is called a blacksnake—a whip with a big handle and a long, braided leather lash. The principal took the whip down, flicked it a few times, and said, "I understand you're not getting good grades. Well, you know what to expect if you don't improve!"

The boy went out of that office terror-stricken. He was behind in his work, having been ill most of the year before. Because he did not understand the material and was too shy to ask his teacher for help, there appeared a huge gap between what he knew he should do and what he felt he could do. So he did the only thing he thought was left—he copied answers from other students' papers. And after several weeks his grades improved. 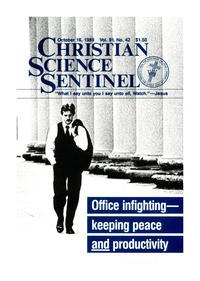