"The earth shined with his glory"

You don't hear the word glory much today. Maybe you recall someone talking about a summer morning as "glorious." But the word glory is used often in the King James Version of the Bible.

For example, we're told that Jesus in his prayer to God before his crucifixion, when speaking of his followers, said: "The glory which thou gavest me I have given them; that they may be one, even as we are one." John 17:22. And God is described by the Psalmist and by Stephen in the book of Acts as the "God of glory." The writer of Ezekiel says, "The earth shined with his glory." Ezek. 43:2. 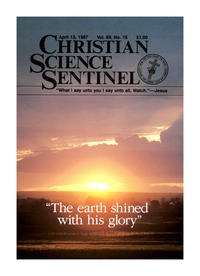