What does it take to recognize the presence of divine Spirit? What opens our eyes to God's healing power?

Christ Jesus' healings contradicted appearances. He called Lazarus to come forth from the grave. He told the man at the pool of Bethesda, who had been ill for thirty-eight years, to pick up his bed and walk. And the man did so. In healing Jairus's daughter, he said to the mourners, "Weep not; she is not dead, but sleepeth." The Bible account continues, "And they laughed him to scorn, knowing that she was dead." But in spite of their unbelief, she arose healed. See John 11:1–44; John 5:1–9; Luke 8:41, 42, 49–56.

Jesus said to his followers, "Judge not according to the appearance, but judge righteous judgment." John 7:24. His own righteous judgment enabled him to discern and prove that God's beloved offspring—cared for and sustained—was really right where a sick man appeared to be, right where a dead child appeared to be. He said, "As I hear, I judge: and my judgment is just; because I seek not mine own will, but the will of the Father which hath sent me." John 5:30. 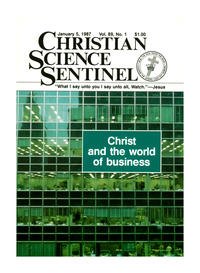