You remember Herod. The Bible tells us he was king of Judea when Christ Jesus was born. When the wise men came seeking the blessed child, Herod was worried. Fearing he would lose his crown to the prophesied Messiah, he told the wise men to let him know when they had found the child so he could come "worship."

Actually Herod's intent was wholly murderous. He only wanted to know where the child was so he could destroy him. But Herod's scheme was thwarted in a way he could not foresee. A divine power and presence was at work in human affairs, and he could no more hinder it than one could stop the earth's rotation. In fact, Herod's actions only succeeded in fulfilling Biblical prophecy about the Messiah. 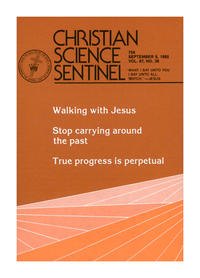