Look for the sun dollars

In some places people speak of bright disks of sunshine flickering among the shadows cast on the ground by the foliage of trees or shrubs as "sun dollars." My curiosity as to why they are always round was answered in a film I used in my art classes in public school.

In the film a well-known artist showed ways to paint tree shadows, including the interlaced spots of sunshine. He demonstrated his explanation by means of a cardboard in which he had cut out small holes of various shapes. Some were rectangular, triangular, or hexagonal, some square or star-shaped, but none circular. When he held this before a lighted candle on a table, the beams were of the same shape as the openings. But outdoors, when he held the cardboard up to the sun, the beams cast on the ground were all circular. The artist explained that the sun projects its own image through the holes. He added that during a partial eclipse, all the shapes are crescents. 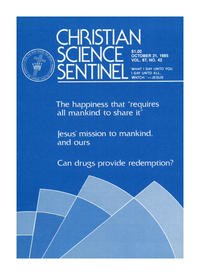