Since my first testimony appeared in the Sentinel some years ago,...

Since my first testimony appeared in the Sentinel some years ago, I have had much cause for gratitude. There have been so many proofs of God's loving and certain guidance that I cannot help gratefully recognizing His wisdom. Along the way, I've learned to put aside human will and pray, "Thy will be done" (Matt. 26:42). God wills only the best for His children, even though we may not always fully recognize this.

At one point, when we were living in Brazil, we had to change our residence to Europe. Once there, we had to move again several times because my husband's work required it. At one point we moved to the Italian-speaking part of Switzerland. This stay gave me the opportunity to become acquainted with a new culture and language—in this case, Italian. This, in turn, proved to be a blessing in the branch Church of Christ, Scientist, I joined as well as in helping others individually. Eventually, several years after the passing of my husband, I felt led to return to my homeland (Germany)—an idea, until then, I had rejected. It was a true homecoming too, knowing that in God's universe there are no exiles, not even voluntary ones, because our real home is where God is—namely, everywhere! Also, I realized that there is no past or future for God's ideas, because man exists in the eternal now, in complete harmony. As Paul says of God (Acts 17:28), "For in him we live, and move, and have our being." In all of these ventures I was companioned by the words of Hymn No. 148 from the Christian Science Hymnal, which begins:

Send a comment to the editors
NEXT IN THIS ISSUE
Testimony of Healing
My life today bears little resemblance to what it was six years ago... 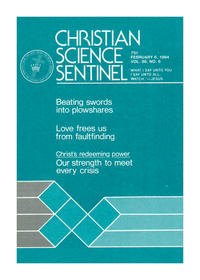