What about the prodigal's brother?

Christ Jesus' parable of the prodigal son may be the best known of all parables. See Luke 15:11–32 . Many have quoted it, studied it, and been instructed by it. Generally, the focus is on the prodigal, but it can be argued that his brother had the more serious problem.

The other brother's problem? In part, self-righteousness. A self-righteous position is a serious impediment to spiritual progress because it hinders the detection of our own errors while making us quite aware of everyone else's! The detection and destruction of erroneous beliefs and sin are essential to reformation and Christian demonstration. Self-righteousness made the brother mentally rigid and unreceptive. His tunnel vision resisted any view but his own. His thoughts were locked in the conviction of personal rightness, blinding him to his own needed regeneration while magnifying the shortcomings of the prodigal. He was unable to forgive, to love, to rejoice. 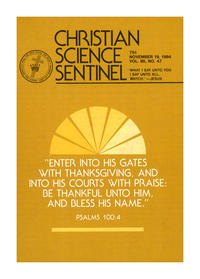