"In the midst of a revolution"

The woman in the pulpit doesn't know of Einstein, Heisenberg, or Bohr, doesn't know of the great physicists of the twentieth century still to come. Her sermon is being delivered in 1880 in Boston. Yet in it she states with assurance: "We are in the midst of a revolution; physics are yielding slowly to metaphysics; mortal mind rebels at its own boundaries; weary of matter, it would catch the meaning of Spirit." Christian Healing, p. 11.

The woman was Mary Baker Eddy, the Founder of Christian Science. And some decades later, popular books and magazines were immersed in explaining to the public the extraordinary change that had indeed been taking place in the natural sciences' concept of matter. 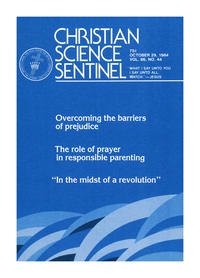