Another flight instructor and I sat at the approach end of an airport runway, watching the first solo flights of two students of ours. Apprehension can take over at such times, and as his student began his approach, I asked my friend what he was thinking. He was a fundamentalist. He said he was praying that God would let nothing go wrong.

When my student began his approach, I was asked the same question. I replied that I was praying for a clearer understanding of man as in truth God's spiritual idea, reflecting divine intelligence; and that I was expecting this unerring intelligence to guide the student to do the right thing. Each student performed well, and each instructor, I think, felt vindicated in his method of prayer. My friend apparently felt that praying is asking God to intercede directly in the affairs of mortals, while I regard it mainly as a preparation of thought enabling us to hear and respond to God's spiritual communication and direction. 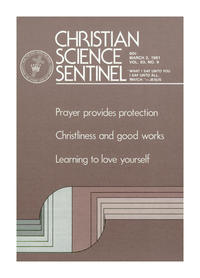