One of the great social and political issues of these days is that of human rights. This issue is the subject of intense negotiations at the United Nations and of major diplomatic interchanges between governments.

There has long been some awareness that the rights of humanity are of more than human origin. The Bible from start to finish affirms the status of man as the child of God, made in the image and likeness of God, and hence with divine rights. The drafters of the American Declaration of Independence began with what the Discoverer and Founder of Christian Science, Mary Baker Eddy, called "that immortal sentiment": "Man is endowed by his Maker with certain inalienable rights, among which are life, liberty, and the pursuit of happiness" (see Science and Health with Key to the Scriptures, p. 161).

Send a comment to the editors
NEXT IN THIS ISSUE
Article
Wake up to reality! 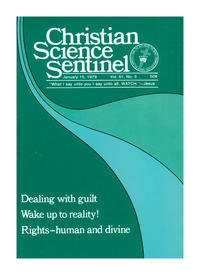