Fifteen hours before I was scheduled to have an operation...

Fifteen hours before I was scheduled to have an operation called a coronary artery transplant, the doctors said I had a condition of the blood that made the operation inadvisable. They could find no cause for the blood condition and said they could not heal it. I was sent home, because they could do nothing more for me. I was told I would be an invalid as long as I lived because of the serious condition of my heart. This put me into a deep state of depression.

Several months later in my despair I cried aloud to God to help me in some way. A few days after that I found in a bookcase a copy of Science and Health with Key to the Scriptures by Mary Baker Eddy that had belonged to my mother. Years earlier I had attended a Christian Science Sunday School. But I had given up Science in my adult life, because my husband was opposed to what he, at that time, thought it to be, and I felt giving up Science would bring peace to our family. I eagerly started reading Science and Health. For the first time I began to see the nothingness of matter and God's allness.

Send a comment to the editors
NEXT IN THIS ISSUE
Testimony of Healing
While on a crowded subway one afternoon I was suddenly... 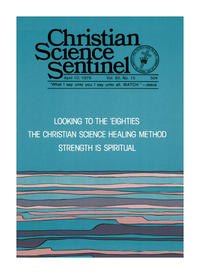