As a child I had the inspiration of attending a Christian Science Sunday School...

As a child I had the inspiration of attending a Christian Science Sunday School. After high school I worked in the office of a pediatrician. I really could not see any inconsistency in this at the time. Christ Jesus said (Luke 16:13): "No servant can serve two masters: for either he will hate the one, and love the other; or else he will hold to the one, and despise the other. Ye cannot serve God and mammon." I could not work in the medical field and still adhere to the teachings of Christian Science, but I had to learn this.

I later married and had three lovely daughters. One girl suffered from asthma. My husband's job was transferred to the West Coast, where he was laid off within three weeks because a contract was not renewed. We chose to stay in the area, rather than be transferred back to our former home, as the opportunities for employment of his skills seemed to be greater there. He was able to find work, but it was not in his chosen field, so we were living on a lot less income.

Send a comment to the editors
NEXT IN THIS ISSUE
Testimony of Healing
One of the most wonderful things about being a student of... 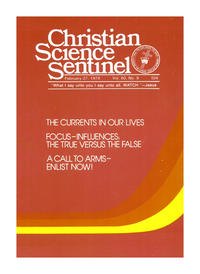