"One thing I know, that, whereas I was blind, now I see."John 9:25; Only a dozen words, eleven of them monosyllables, but they constitute one of the most famous testimonies to the power of the Christian method of healing ever delivered.

The man who testified in this way had been born blind, and Christ Jesus healed him. He was undoubtedly grateful, and despite the Pharisees' hostile questioning about the healing and about the man who was responsible for it, he spoke up in his own spontaneous, straightforward way, refusing to be deterred by the threatening attitude of Jesus' enemies. As a consequence, he has been an inspiration to successive generations of Christians ever since, assuring them of the undeniable healing power of the Christ, Truth, and the rightness of publicly acknowledging blessings received. 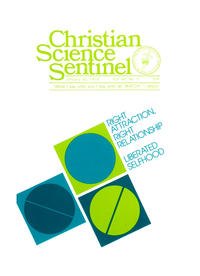