I became a student of Christian Science shortly after I witnessed...

I became a student of Christian Science shortly after I witnessed the healing of my brother when he was a boy of eleven years. I was not yet fifteen, but I was so impressed by this healing that I knew then that Christian Science would be my religion in the future.

My brother had been seriously ill for many weeks with what had been medically diagnosed as an ulcerated intestinal tract. Through lack of nourishment he had become alarmingly emaciated. Two doctors, one a child specialist, said nothing more could be done for him. My mother called a Christian Science practitioner and asked her for treatment for the boy. My brother was healed within two weeks and began to eat normally. Two weeks later he had gained twenty pounds. I soon became a pupil in a Christian Science Sunday School. I can never adequately express my gratitude for the teaching I received, for it was there I learned that Christian Science is a way of life. 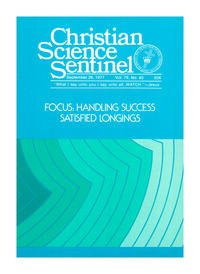