Being fully open to God's love for us

Recognizing Substance in All We See and Do

Christian healing occurs when substance—that which is real and eternal—displaces the unreal and temporal in thought. Understanding and recognizing substance isn't as hard as it might sound, and everyone is doing it every day, although he may not realize this.

Let's consider some of the common hints of substance we deal with all the time. For instance we say that 4, IV, and (6—2) are all four, but what we mean is that these are symbols for the number four. The number four is a mental concept, and as a mental or mathematical concept it is governed by the rules of mathematics. Herein is its usefulness, its substance. Regardless of which symbol one uses to bring the concept to mind, the substance of four is unchanged, and the symbol in and of itself has no substance.

Send a comment to the editors
NEXT IN THIS ISSUE
Article
God's Healing Power: Keep with It! 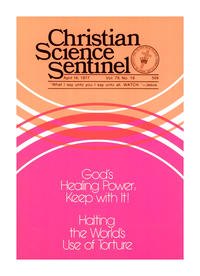