I early learned to love the Bible

I early learned to love the Bible. I began reading Science and Health by Mrs. Eddy when I was about fifteen. At one time I was estranged from Christian Science teachings because I believed that there was too much adulation paid to the person of Mary Baker Eddy, the Discoverer and Founder. However, I continued to read Science and Health because I found the logic in the reasoning. After a period of time there began an awakening in my thought concerning Mrs. Eddy.

In Matthew we read (7:16): "Ye shall know them by their fruits. Do men gather grapes of thorns, or figs of thistles?" And Paul said to the Thessalonians (I Thess. 2:13), "For this cause also thank we God without ceasing, because, when ye received the word of God which ye heard of us, ye received it not as the word of men, but as it is in truth, the word of God, which effectually worketh also in you that believe." Again in II Peter (1:21), "For the prophecy came not in old time by the will of man: but holy men of God spake as they were moved by the Holy Ghost." I saw the relationship between Mrs. Eddy's message and that of the prophets. 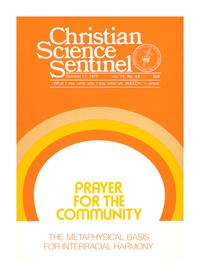