Why Leave the Old Church for the New?

For some years after Mrs. Eddy's discovery of Christian Science, she did not abandon hope that this Science, with its Christly method of healing, could be assimilated into the existing churches. For several years she remained a member of the Congregational Church and made no suggestion to her earliest students that they leave their own church affiliations. The change came gradually, pressed forward by the doctrinal differences she clearly saw between her new vision of Truth and the older creeds. Then, finally she was led to leave the church that she had loved for nearly forty years and take steps to found another based upon the new, inspiring truths that had been revealed to her. This she named the Church of Christ, Scientist.

Despite the many points of similarity between older, orthodox churches and the still comparatively young Church of Christ, Scientist, there are fundamental differences. For instance: all Christians, as well as Jews and Muslims, honor the one God. But Christian Science honors God, the divine Principle or cause of all true being, in a unique and uncompromising sense. It recognizes that because God is Spirit, and He is All, there can in truth be no substance in matter. Because God is Love, and God is supreme, there can in reality be no hate, no ugliness, no disease, no evil of any kind. Because God is Truth and is ever present, there can be no imperfection. Because He is Life and all-power, there is no inaction, no lack of vitality, no death. Because He is Mind, perpetually expressed in intelligence, there is no lack of wisdom and no loss of consciousness, Man, the manifestation of Soul, invariably displays perfect consciousness and intelligence and is, therefore, eternally whole, healthy, harmonious, progressive, and free. 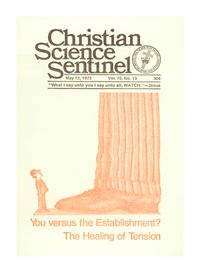