The Laws of Christian Healing

Could the Pilgrim Fathers have traveled to America by jet plane? Yes, if the laws of aerodynamics and jet propulsion had been discovered over 350 years ago, and if mankind had by then acquired the technology to utilize them for air travel. The laws have always existed, but at that time only a few thinkers had caught even a feeble glimpse of them. It was to take centuries of research and technological development before humanity could grasp them well enough to use them for the benefit of transatlantic travelers.

In the Mayflower, and during the first rugged winter on American soil, prayer was offered for those Pilgrims who became ill. But many died. Could their treatment through spiritual means have resulted in more lives saved? Yes, if the divine laws of healing had then been understood and practiced with great authority. At that time the prayer of these good people, though based on deep love for God and faith in His goodness, was not supported by the scientific understanding of God's law of health and harmony.

Send a comment to the editors
NEXT IN THIS ISSUE
Testimony of Healing
When I was just beginning to learn to read, I received a Bible as... 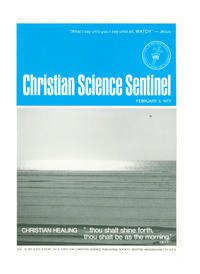