Among many of the very loving instructions contained in the Sermon on the Mount, there are other demands that indicate the exact nature of God's law and give us a sense of the Science of being. While Christ Jesus never referred directly to God as divine Principle, this concept was very thoroughly implied in his teaching. He indicated that if men would escape the punishment of sin, they would have to stop sinning. There is no other way. And in another instance he spoke of one being delivered to the judge, and he said, "Thou shalt by no means come out thence, till thou hast paid the uttermost farthing." Matt. 5:26;

One can see the reasonableness of this demand in the case of sin, and Jesus showed the way of regeneration and the effective mercy of God in the forgiveness of sin. But what about sickness? Does the same rule apply? What is involved in paying the utmost farthing in respect to disease? Mrs. Eddy gives us the answer in the textbook, Science and Health. She says: "Belief produces the results of belief, and the penalties it affixes last so long as the belief and are inseparable from it. The remedy consists in probing the trouble to the bottom, in finding and casting out by denial the error of belief which produces a mortal disorder, never honoring erroneous belief with the title of law nor yielding obedience to it." Science and Health, p. 184;

Send a comment to the editors
NEXT IN THIS ISSUE
Testimony of Healing
It was in 1958 that I felt the acute need to know more about... 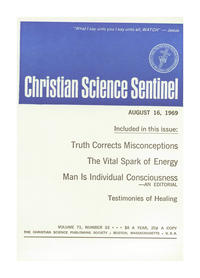