Nothing just happens. Phenomena evidence the application of some law. Perhaps you have heard that according to the laws of aerodynamics a bee can't fly but the bee doesn't know this and so he flies. This, according to aerospace engineers, is a legend. The fact that a bee does fly compels the obvious—he can fly. Why? Because he consistently utilizes the laws of aerodynamics.

Another legend we hear today is that a Christian Scientist cannot destroy the evil effect of material laws. But the fact that he has risen in thought and experienced harmonious results proves he can ascend higher. Yes, each spiritualized thought strengthens him for a further flight Spiritward. An error of temperament corrected, a character improved—each claim of materiality surmounted—lifts him somewhat above the belief of life and intelligence in matter.

Send a comment to the editors
NEXT IN THIS ISSUE
Article
Where Is Consciousness? 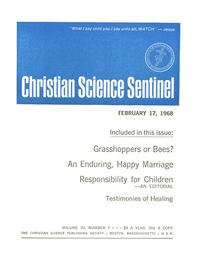