WHAT, ACTUALLY, IS CHRISTIAN SCIENCE?

The student of the writings of Mary Baker Eddy, the Discoverer and Founder of Christian Science, is soon aware of the great difference between this Science as she presents it and the concepts many people have of it—people who have learned of it casually or by hearsay. What Mrs. Eddy presents, far from being only another method of treating disease or another form of religious teaching more or less like those already established, is a basic scientific discovery with vital and immediate practical implications for men and women everywhere, and for the world.

For a full and authentic account of the subject, one must go to Mrs. Eddy's principal book, "Science and Health with Key to the Scriptures," the Christian Science textbook; and those who know something of this book and its history are usually quick to recommend to others that they acquaint themselves with it, whether they are considering accepting its message or not. Its impact thus far on the thought and outlook of mankind and its further broad implications plainly warrant this attention. It is not too much to say that the revolutionary character of the book, if its message is to be accepted, surpasses that of any scientific discovery that has gone before. 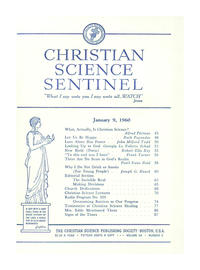