One of the foremost problems confronting mankind is that of continuous supply. Beholding creation through the physical senses, mortals see what appears to be a world of materiality. Such a vision presents an erroneous picture. Since matter is finite, everything material is limited, and there often seems to be not enough of anything to go all the way around. While some individuals seem to have an oversupply of certain things, there appears not to be enough of others. Again, some seem to have more than enough to meet their every need, while others have an insufficiency of all things. Also, there are those who at certain times have abundance and at other times suffer from a dearth of necessities. From a material point of view the supply of good is incomplete, intermittent, and frequently subject to cessation.

Mankind, generally, is willing to admit that the universe was created by an all-wise, all-knowing creator. And certainly an all-wise and all-knowing creator must have foreknown the possible needs of His creation. He must have foreseen what each and all of His ideas would require for their continued maintenance, sustenance, and preservation; and since He is also all-loving and all-powerful, He must have provided for them. It is impossible to conceive of the infinite God as ever running short of supply; of our tender, compassionate Father-Mother God as ever curtailing or limiting the supplies of the beloved ideas of His creation. Therefore, what mortal man beholds must be a mistaken sense of things, a wrong concept of God's creation—a misunderstanding of what really exists. 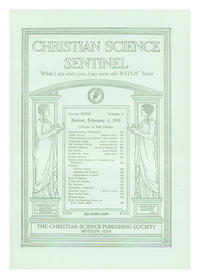