Through its various activities Christian Science is waging a relentless war against evil and all its personifications, —lust, malice, hatred, envy, jealousy, anger, variance, or through its more subtle forms,—material pleasure, selfishness, greed, idleness, self-will, self-righteousness, indifference, or any other of the etceteras of that word. Sin is the worst enemy of mankind. It promises material pleasure to the sinner; and he partakes of its forbidden fruits only to find that woe comes for what is done. Thus the sinner violates God's commandment; and the sin which he makes his bosom companion torments him until he quits sinning. Where shall we find refuge from this lie of material sense, except in Christ, Truth? And how shall we deal with that which is nothing but a false belief of life in matter? Every one of us desires to fight the claims of evil, yet past efforts have often resulted in failure because we had not the mighty weapon which destroys evil. Christian Science is that weapon. Its mission is the fulfilling of the law, whereby all evil is destroyed, including disease and death. 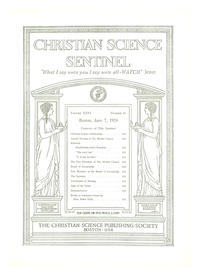