After the resurrection, finding that their number lacked one, and prayerfully considering the situation, the disciples immediately took steps to fill this vacancy. In the first chapter of Acts we read: "And they prayed, and said, Thou, Lord, which knowest the hearts of all men, shew whether of these two thou hast chosen. ... And they gave forth their lots; and the lot fell upon Matthias; and he was numbered with the eleven apostles." This incident shows that the eleven disciples felt their need for guidance in the choice they were about to make; there was no hesitation or delay in the appointment, and it then only remained for those present to cast their lot.

If Christian Scientists took this little incident into consideration when making their choice of officers it would not be necessary to spend hours trying to fill a vacancy, and much would be gained. Often a whole evening may be taken up in an election, for the simple reason that members have not given sufficient time to the study of the situation or the requirements necessary for the fulfillment of a particular branch of church work. As Mrs. Eddy says in "Science and Health with Key to the Scriptures" (p. 34), "If Christ, Truth, has come to us in demonstration, no other commemoration is requisite, for demonstration is Immanuel, or God with us; and if a friend be with us, why need we memorials of that friend?" It will thus be clearly seen that for demonstration it is necessary to be acquainted with Principle, or cause, from which one must deduce the absolute conclusion, and that this deduction must be governed by an unchangeable and dependable law in order that a correct solution to the problem confronting the members may be gained. From this viewpoint it is necessary that each individual should ask: "What are my reasons for voting? Am I prompted by personal considerations, or selfishness, or by desire for the advancement of our cause?" Sometimes it may be found that one is being influenced by the fact that some person has held the position so long that it is feared he may feel hurt if he is removed. We have only to know that we are advancing and are helping others to advance, and when true Christian Science is demonstrated it will be seen that mortal personality is excluded from the truth and Mrs. Eddy's statement on page 513 of Science and Health will be understood, where she says, "Advancing spiritual steps in the teeming universe of Mind lead on to spiritual spheres and exalted beings." The realization that man is in his proper place all the time and that mortal personality is out of place in a Christian Science demonstration would prove that Truth and Love control man, and a correct solution would be promptly gained.

Send a comment to the editors
NEXT IN THIS ISSUE
Article
"Come now, and let us reason together" 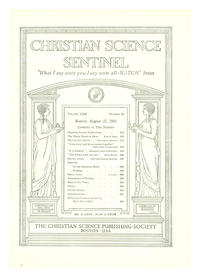