"Cling steadfastly to God and His idea"

The world has reached the point where men must do their own thinking, and not let others do the thinking for them and then follow their dictation, as if they themselves could not think, and as if there were no possibility of the others ever being wrong in their thinking. Mrs. Eddy says in "Science and Health with Key to the Scriptures" (Preface, p. vii): "The time for thinkers has come. Truth, independent of doctrines and time-honored systems, knocks at the portal of humanity. Contentment with the past and the cold conventionality of materialism are crumbling away. Ignorance of God is no longer the steppingstone to faith. The only guarantee of obedience is a right apprehension of Him whom to know aright is Life eternal. Though empires fall, 'the Lord shall reign forever.'" Through the teachings of Christian Science the student learns that God is the only intelligence there is, and man made in God's likeness must express the divine intelligence, and cannot, therefore, be dictated to by other than God, his creator.

The person who does a thing simply because some one else did it, or because some one has told him to do it, is to be pitied rather than censured, because ignorance alone seems to limit a man's capacity to think and act for himself, and the moment this seeming spell is broken and one realizes that God is the only intelligence, then he comes into his rightful heritage as the son of God, and can no longer be controlled or governed by persons or by things material. Had the three Hebrew children allowed themselves to be dictated to and controlled by persons, they would not, perhaps, have been thrown into the fiery furnace, but they would have broken the First Commandment, been disobedient to God's eternal law, and have had other gods before divine Principle. Had Daniel listened to persons and their edicts, allowed himself to fall under the hypnotism of fear, he would never, perhaps, have been thrown into the den of lions, but he would have broken the commandment by trying to give unto persons that which belongs to Principle alone, the right to govern and control the universe and man. 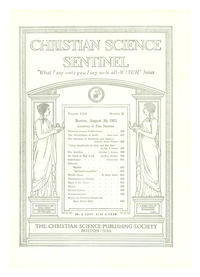