Nowhere is there to be found a stronger refutation of the claim that is even now occasionally put forward, namely, that Christian Scientists do not pray, than is given on page 133 of "Miscellaneous Writings," where Mrs. Eddy, in a letter to one who had attacked Christian Science and referred to her as "prayerless Mrs. Eddy," not only disproved the statements of this critic, but also pointed out to her followers her own practice in regard to daily communion with God. She says: "Three times a day, I retire to seek the divine blessing on the sick and sorrowing, with my face toward the Jerusalem of Love and Truth, in silent prayer to the Father which 'seeth in secret,' and with childlike confidence that He will reward 'openly.' In the midst of depressing care and labor I turn constantly to divine Love for guidance, and find rest."

If further proof is desired that Christian Scientists are taught to pray, we have only to turn to Article VIII of the Manual, where in Section 4 our Leader outlines a prayer for daily use, and in Section 1 she also counsels daily seeking for deliverance from all evil. On page 442 (line 30) of Science and Health she clearly indicates an important subject of prayer, which she has also made imperative through Section 6 of Article VIII of the Manual. The chapter "Prayer" in Science and Health is, particularly to beginners, one of the most beautiful and probably the most appealing of all in this text-book. In it Mrs. Eddy quotes with approval the Scriptural injunction to "pray without ceasing," and also, at the close of the chapter, she has given us that wonderful spiritual interpretation of the Lord's Prayer which has brought comfort and healing to so many aching hearts. 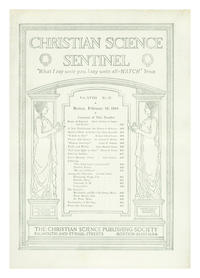