To be spiritually-minded is to be broad-minded, but the belief in substance-matter entails limitation from the outset. It was upon a basis of spiritual clear-sightedness that prophets and apostles foretold the future and achieved results so miraculous to human sense. Endued with such spiritual insight and foresight, and actuated by a high sense of duty and a spirit of broad-minded philanthropy, all the world's great benefactors. from ancient prophet to modern reformer, have from the vantage-ground of advanced ethical and moral attainment been able to look out over the field of the world's activity, see the need and point the way, wholly unmindful of danger or weight of responsibility. And this superior intuitive ability is the secret of magnificent and far-reaching achievement on the part of all these spiritual seers.

It is narrowness and bigotry alone which have in the past hindered the progress of the race along the lines of philosophical and scientific research. To the untutored mind of the days of Columbus, the visual horizon bounded the world; and to this same limited sense in the days of Copernicus, the earth was the central figure of the universe. A similar spirit of narrowness, manifested in a lamentable willingness to base all calculations and draw all inferences from the standpoint of sense testimony and generally accepted theories, has rendered mankind unable throughout the centuries to reconcile so-called natural and divine law; and in consequence science and religion have been divorced. In vain have learned philosophy and scholastic theology struggled to reconcile reason and revelation, all unmindful that centuries ago Paul in his epistle to the Corinthians had given the key to the solution. He declared, "Now we have received, not the spirit of the world, but the spirit which is of God; that we might know the things that are freely given to us of God. Which things also we speak, not in the words which man's wisdom teacheth, but which the Holy Ghost teacheth; comparing spiritual things with spiritual. But the natural man receiveth not the things of the Spirit of God; for they are foolishness unto him: neither can he know them, because they are spiritually discerned." In accordance with this apostolic injunction Christian Science teaches man to interpret spiritually all of God's Word, including the history of creation in the first chapter of Genesis : and to those who accept its teachings in this regard and thus interpret the universe, the seeming conflict between the results of scientific observation and the statements of the Bible disappear. In the same way the so-called miraculous works of Jesus and the early prophets, as well as those which resulted from the efforts of our Lord's followers for some three hundred years after his departure, are seen to be in no sense violations of law, but on the other hand to be in direct accord with spiritual law. Otherwise Jesus could not have done these things consistently, after declaring that he came not to destroy the law, but to fulfil it. 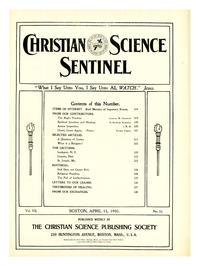