Bigotry and the latent spirit of persecution has so far prevailed in the legislature as to induce the members in both branches to pass a law aimed at the practice of Christian Science. The members of the legislature mean to be liberal. They would declare unreservedly in favor of liberty of conscience, and they revolt against the persecutions and outrages of the dark ages. Yet these people who believe the good Lord will answer their prayers literally, just as he has promised, and who are willing to trust to good morals, good habits, and correct living, rather than drugs, are so foolish and ridiculous that they ought to be made to practise what we believe instead of being allowed to follow the dictates of their own conscience.

Of course we will not burn them alive, as they used to do in such cases. It will not be necessary. We will just enact a law and they will obey the law. But suppose they do as the ancient martyrs did. Suppose they refuse to obey the law, and persist in their foolish practices. What then? Of course the law has a penalty, or it would not be of any use. If these silly, unreasonable Christian Science people are so strong in their faith that they think they ought to defy the law, as Daniel did, and as thousands of holy martyrs have since done, what will happen then? Why, of course they must expect to suffer the penalty of the law we have made to bind their conscience. We will send them to prison. It will serve a devout and gentle woman right to go to prison if she is so silly as to trust in the name of Jesus for present help in time of need! We have no intention of persecuting the Christian Scientists, as the Quakers, the Protestants, the non-Conformists, the Congregationalists, and the strict Conformists were persecuted. Yet we have passed a law that will land them in prison and keep them there if they are half as obstreperous as was any one of holy martyrs whose fate we deplore and whose persecutors we detest. 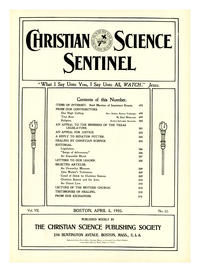