The Blessings of Christian Science

Many seem to be under the impression that Christian Science is nothing more than a remedial agent in sickness. Now, although the physical healing naturally attracts much attention, it is well to remember that Christian Science means infinitely more. Healing is one of the signs that "shall follow them that believe." and it naturally and inevitably pertains to him who realizes God's allness enough to let the Christ-mind be revealed. Sickness never fails to disappear in proportion as truth appears. If the sick are not healed, the broken-hearted blessed, and the sinful uplifted, it proves beyond cavil that the Christ-mind is not adequately attained.

If was the Mind of Jesus that healed the sick as well as the sinful, and if, as Paul declares, "we are also his offspring," we should follow Christ Jesus in his demonstrations by reflecting the same Mind. If Jesus had thought it good for us to use material methods, would he not have done so himself or have said something about it? Instead of so doing, he healed metaphysically, taught his students to do the same, and said, "these sigus shall follow them that believe." 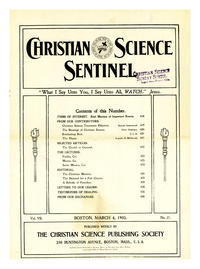