It was over six years ago, that I found myself, after...

It was over six years ago, that I found myself, after some weeks of untold suffering, at death's door with "organic tumor." Medical aid failed to give relief, and an operation was said to be the only way of escape, with small hope of success. I, however, refused to submit to it, and "cried unto God in my trouble and he heard me." and sent a good lady to me who offered me Christian Science, which I gladly accepted, although I had hardly ever heard of it. I began treatment at once and was so much benefited by the first treatment that the intense fear was almost wholly removed. In a few days I was so changed that I hardly recognized myself. I began reading the "little book," Science and Health, the first day, and I hardly left it until I had devoured its contents. I was so hungry for what I found therein. As the thought was changed the body responded until I was healed so sweetly and surely that I knew there could never be a return of the old trouble. Only those who have had a similar experience can know what it means; the peace, joy, and sweetness cannot be told.

I want to express my deep gratitude for the way shown us by our Leader, for all the words she has given in Science and Health and her other writings. I am also grateful to the dear one who so patiently and wisely led me out of bondage and into freedom.

Send a comment to the editors
NEXT IN THIS ISSUE
Testimony of Healing
I was healed some nine years ago of severe nervous... 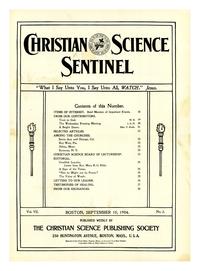