The Sophistry of Discouragement

We, who are beginning the vast study of the Science of existence, who are just learning how to lay hold on the simple truths of being, need every encouragement, for unfortunately it would seem that our every endeavor is met by an argument intended to dissuade us. The situation, apparently, is this: We have been submerged so long in the mesmerism of matter, its every incident and detail appear so real to our view, accustomed as we are to a distorted perspective, that it seems very difficult to turn the gaze in the opposite direction. A ship set adrift will sweep helplessly in the direction of tide, current, and wind. Now start the machinery. Begin to get the huge bulk under control, and you will see that it does not readily and at once, answer to the new propulsion. The natural forces seem reluctant to release their grasp. Slowly, with much straining and a mighty effort, the drifting is reduced, until finally the vessel begins to move under intelligent guidance. Inch by inch it fights its way up stream to its moorings.

The similitude may not be entirely satisfactory, but it gives a fairly accurate picture of what takes place when a mortal wakes up to find himself helpless, and drifting under the control of the tide of general belief. Such an one is entitled to every bit of encouragement and assistance he can find. Above all, he requires to have himself so well in hand at all times, that he will not be tricked by the little artifices by means of which a subtle claim to intelligence seeks to impede his progress. The Christian Scientist should be an expert logician, possessed of a capacity for sound reasoning which will enable him to lay bare every false claim. Possibly this is the characteristic which men are most deficient in. The world generally is satisfied with a very inferior quality of logic, and it suffers because of its unwillingness to go deeper into a question than the scratching of the surface. If it be true, as Bacon says, that writing makes an exact man, then it were well if we all turned writers. But there is something back of the writing which makes an exact man. Our thought processes must become more precise, if we desire to be thoroughly well fitted for an investigation of truth. It is recorded that "Mary kept all these things and pondered them in her heart." She gave herself up to the contemplation of the heavenly truths revealed to her pure consciousness. So must we all ponder, and this communion with the Most High, this seeking to know more of the changeless creator and His unchanging laws, will develop in each a clear vision; it will necessarily shape thought into the likeness of Him who is forever the very selfhood of all truth, accuracy, and integrity of being. The image and likeness of God cannot be a careless thinker. This is apropos of the statement in Science and Health, page 128, "The addition of two sums in mathematics must always bring the same result. So is it with logic. If both the major and the minor proposition of a syllogism be correct, the conclusion cannot be false if properly drawn. So in Christian Science, there are no discords or contradictions, because its logic is as harmonious as the reasoning of an accurately stated syllogism, or of a properly computed sum in arithmetic." A proper appreciation of the mental methods necessary to the practice of Christian Science justifies its title and exposes the shallow criticism which does not penetrate beyond the frontier of the domain of right thinking. 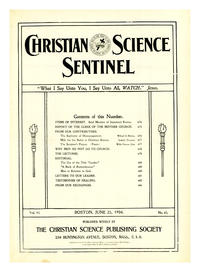