This article was later republished in&nbsp;The First Church of Christ, Scientist, and Miscellany:&nbsp;My. 231:1-24

Mrs. Eddy endeavors to bestow her charities for such purposes only as God indicates. Giving merely in compliance with solicitations or petitions from strangers incurs a liability to work in wrong directions. As a rule, she has suffered most from those whom she has labored much to benefit—also, from the undeserving poor to whom she has given large sums of money, worse than wasted, she has, therefore, finally resolved to spend no more time nor money in such uncertain, unfortunate investments. She has qualified students for healing the sick, and ceased practice herself in order to help this work in other of its highest and infinite meanings as God, not man, directs. Hence, letters from invalids demanding her help, under such circumstances, do not reach her, they are committed to the waste basket by her secretaries.

"Charity suffereth long and is kind," but wisdom must govern charity, else love's labor is lost, and giving is unkind. As it is, Mrs. Eddy is constantly receiving more important demands on her time and attention than one woman is sufficient to supply: hence, it were as unwise for her to undertake new tasks, as for a rentor, who has not an empty apartment in his house, to receive more rentees. 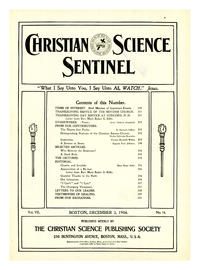