The Things that We Can Do

Right living has ever been recognized as the need of mankind, though each passing generation has looked to some successor to usher in the reign of righteousness. Men instinctively cling to the idea of a millennial era when peace and love shall rule the hearts of all peoples, but they do not generally admit that their own time can be the period of its dawning. Mortals find it easier, as a rule, to postpone their right doing than their wrong doing. God's demands, they think, can stand for a more convenient season; but their material pleasures, their selfish purposes, or their business, must be attended to as they have opportunity. As Jesus said of his teachings, that they were not to give peace to false conditions, so Christian Science has come to waken Christians and others out of their chronic apathy towards the claims of God.

A too common conception of God is that of an indulgent parent, who will not hold His children to the strict observance of His commandments. Christians who entertain this thought suppose that if they keep a fraction of their Master's teachings, live a fairly moral life, and avow a general acceptance of Christianity, then the balance of God's requirements will not be urged against them. Although they had abundant opportunity to do the right things they have left undone, they still comfort themselves with the belief that their sins will be pardoned at the last. This attitude towards God does not ascribe as much dignity to His law as to the laws of mortals. In our human courts even, those who are ignorant of the laws are not excused from their observance, much less those who know and do not. Why should we deceive ourselves that "the Judge of all the earth" is less just and less exacting than mortal man? 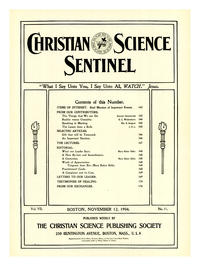