In round numbers the population of the United States as found by the census made last year was 76,000,000. According to the advance copies of the annual report of the commissioner of pensions the list of pensioners has almost reached a round million. The expense of meeting the requirements of the general and special legislation for pensions was, in the year ending June 30, about $138,500,000, exclusive of the outlay for administration and for medical examinations. Thus the millions paid to pensioners in 1900-1901, if paid per capita, would make it necessary for each man, woman, and child to hand over to the collector of taxes something like $1.80 each year.

A movement which is popular in certain parts of the West favors an appropriation by the national government for the construction of irrigation reservoirs for the reclamation of arid lands. It is claimed that one acre of land of the kind that would be made available in this manner will be far more productive than four acres under ordinary conditions. More crops can be raised with practically an assurance against failures. Owing to the productive power of irrigated lands a nomestead could be reduced to forty acres.

Send a comment to the editors
NEXT IN THIS ISSUE
Article
Wednesday Evening Meeting at Cleveland, Ohio 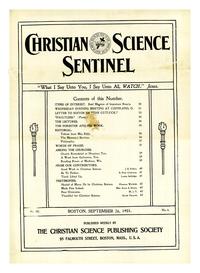