A letter in this article was later republished in The First Church of Christ, Scientist, and Miscellany: My. 169:13-170:10

THE usual Wednesday evening meeting of June 26, was held in Tremont Temple instead of the Mother Church, the attendance being so large that the auditorium of the Mother Church was wholly inadequate. Tremont Temple was filled and the meeting was one of the most interesting of the kind ever held in Boston. It was opened by singing the familiar hymn, "Nearer, my God, to Thee," after which was read, by the First Reader of the Mother Church, the 96th Psalm and a selection from page 191 of "Science and Health with Key to the Scriptures," followed by the usual silent prayer and the Lord's Prayer. After this "Shepherd, show me how to go" was inspiringly sung by the great audience. The First Reader briefly opened the meeting with words of welcome and congratulation, and read the following message from Mrs. Eddy, published in the New York Journal of June 26:—

"Please say through the New York Journal to the Christian Scientists of New York City and of the world at large that I was happy to receive the call of about three thousand believers of my faith in this city, and that I was rejoiced at the appropriate beauty of time and place that greeted them. 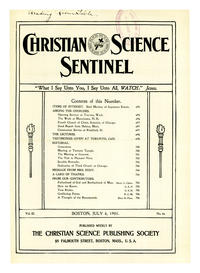